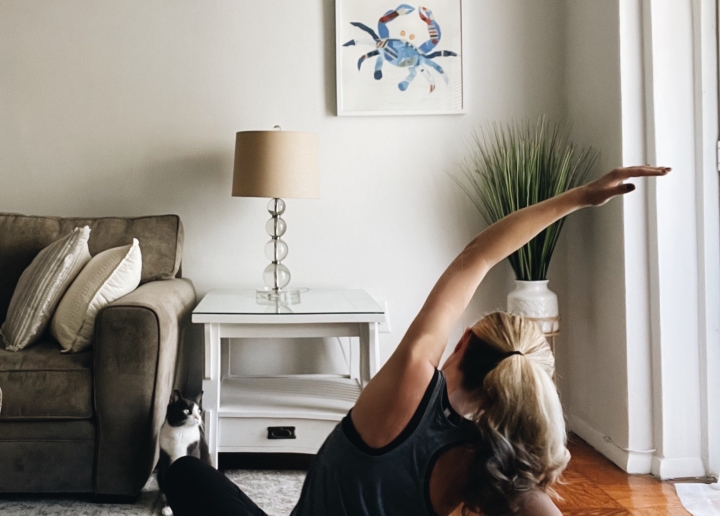 Since yoga is such a major part of my workout routine, I wanted to explore this practice on a deeper level. When did it start? What’s the history of yoga and how has it evolved? What are the different types of yoga and what are their benefits?

Let’s start with the basics. The word “yoga” comes from the Sanskrit word “yuj,” which means “to yoke” or “to bind.” In essence, yoga means to create a union. The word yoga first appeared in The Vedas, which are the sacred texts of Hinduism.

People interpret “union” in different ways. Some say it’s the union of mind, body, and soul. Others believe it’s the breath and body. Others still believe it’s the merging of the soul with the universe or divine source energy.

While the exact origin of yoga is unknown, there is a legend that can give us some insight.

The History of Yoga 101: The Legend of Shiva

It is commonly accepted that Shiva is the “Adiyogi” or the originator of yoga.

Thousands of years ago, he achieved spiritual enlightenment on top of the Himalayas. Excited by this revelation he danced, and then, he became still. Shiva was completely immersed in the present moment, something nobody had seen before.

After hearing news of his discovery, people gathered to watch him. While most came and went, seven men stayed.

These seven men became known as the seven rishis. Shiva shared what he learned and he put different aspects of yoga into these seven men, which became the seven forms of yoga.

The seven forms of yoga include:

This created the foundation for the types of yoga we practice today. Whether Shiva truly existed remains a mystery.

Curious About the Origin and History of Yoga? Here’s the CliffNotes Version

The History of Yoga as It Evolved: The Bhagavad Gita

While nobody knows the exact date yoga began, there is an ancient scripture, The Bhagavad Gita, which outlines the founding principles of yoga. Written between 400BCE and 200CE, this epic poem breaks down yogic philosophy.

The two main characters are Hindu deity Krishna and a warrior named Arjuna. In the epic, Arjuna stands in the middle of battle getting ready to fight. But he hesitates, realizing that fighting and killing these people would be wrong and nothing good could come from it.

Krishna scolds Arjuna for forfeiting his sacred duty as a warrior. This leads to a deep discussion in which Krishna imparts his wisdom regarding the essence of yoga.

He explains that upholding our sacred duty is essential. We are all born with a purpose and a unique way in which we serve the world and the greater good. Sacred duty is what governs individuals, society, and the universe.

Furthermore, Krishna says that yoga is discipline, and discipline is the path to enlightenment. It is only when you cultivate discipline that you can discover inner peace. He also talks about self-knowledge and the importance of looking within. To know thyself is your greatest weapon.

Yoga has come a long way since The Bhagavad Gita. While the practice has evolved over time, the goal of yoga remains the same: self-empowerment and enlightenment.

Translating to “forceful” in Sanskrit, Hatha Yoga is centered around physical force and asana (poses). Specifically, the goal of this practice is to bring your mind and body into balance.

The pace is slower and poses are held for longer to help you realign and relax, while also building strength and flexibility.

A Beginner’s Guide to Hatha Yoga: What You Need To Know About This Practice

Kundalini Yoga is founded on scientific principles, focusing on the energy channels and meridians of the body. To reach a higher state of consciousness, this practice uses postures, movement, and the power of the breath to activate pressure points.

Curious? Check out: An Introduction to Kundalini Yoga

In Sanskrit, vin means “to place” and yasa means “in a special way.” In the context of yoga, this is interpreted as moving with intention.

Vinyasa Yoga helps you flow through your movements mindfully, staying connected to the breath. It’s one of the more athletic types of yoga that helps you calm your mind, while also strengthening your body.

Founded by B.K.S. Iyengar, this type of yoga is focused on alignment, breath control, and precise movements.

Iyengar also uses props, which not only provides support to beginners, but also extra extension for more advanced students. The practice is all about slow and steady progress.

This yoga style is great for people who enjoy routine. Unlike other practices, the set of poses in Ashtanga are the same in every class.

There are six different series throughout the entire system: the Primary, Intermediate, and the four Advanced series. Each series is a progression from the last, preparing you for more advanced poses.

One of the most well-known forms of Hot Yoga, this type of yoga involves a set of 26 basic postures in a room set to 105 degrees.

Bikram follows the 80/20 method of breathing, which is taking a deep breath, doing the pose, and exhaling 20 percent of the air through the nose.

Considered one of the most soothing types of yoga, this practice gives us a change to find stillness and inner peace.

Along with reducing stress, the benefits of Yin Yoga include relieving tension, improving flexibility, and helping you achieve mind-body balance.

Calling all moms to be! Prenatal Yoga is a practice designed around pregnancy, helping women prepare their minds and bodies for giving birth.

This type of yoga involves a lot of pelvic floor exercises and breath work.

A more modern take on Hatha Yoga, Anusara is similar to Vinyasa with the only difference being a primary focus on connecting the mind, body, and heart.

This yoga style combines Vinyasa with Hindu teachings, focusing on our connection to the earth and our oneness with the universe. All poses adhere to the five tenets of Jivamukti philosophy: shastra, bhakti, ahimsā, nāda, and dhyana.

One thought on “11 Different Types of Yoga (Which Is Your Favorite?)”